Please tell us about your background in driving and racing and what national and international titles you hold.

I was 13 when I became interested in driving and my father began teaching me. I count my father as my first driving coach. I have more than 60 national titles in driving which include rallying, kart and drag racing, and five international titles. I have competed in international competitions in Bahrain, UAE and participated in the Middle East Rally which was hosted by Iran.

What type of cars do you race in? What are practices like?

For speed races, I drive a Honda CRX with a 2000cc engine, and a Pride with an upgraded engine of 1800cc which has around 210 horsepower. In order to train for competitions, we practice and improve our skills by testing the cars in practices held at the Azadi racing tracks. Recently a new track has been built in Zarandieh which will be used for practices in the future.

Is anyone one else in your family interested in sports? Do you have experience in any other sports?

What are people’s reactions to you, as a professional female racecar driver?

Given that it is not common for women to be racecar drivers, there are a lot of different reactions. Some people encourage me and believe that this is a groundbreaking activity while others believe that it is exclusively for men. Within the sport, the majority of people are still biased and prefer to have a male opponent.

Has your professional driving affected your everyday driving? Has it ever put you in danger?

When you have a certain skill, you tend to use it when need be. Of course, I don’t use driving maneuvers while driving in the city but when I’m on the road outside the city I tend to enjoy myself. I don’t compare the race track to the road since each one has its own behavior suitable for its particular environment. When one takes these into account, there isn’t really much danger.

What are some challenges that you have faced in this field as a female driver?

The main challenge in this profession is that it has not yet been established as a female sport. Recently in Europe, the support for women in this sport has increased and there are more sponsors. However, a few years back, all over the world, it seemed odd for women to be racecar drivers. Given the culture in Iran, the challenges are twice as much, especially for a woman in a male-dominated field. During the first few years of this sport, there was a debate over the racing outfit.

It was required that women wear a cover on top of their uniforms, but this was quickly dismissed once it was realized how much danger it posed to the driver, so now we race in the regulation uniforms. Regarding the mentality, there are challenges in other segments of racing, for example, in the qualifying rounds, due to a lack of equipment, the times are recorded by hand, so a person’s connections and biases can have an effect on the recorded time. In addition, there is a need to have a close relationship with the team and pit crew, and to ensure that everything is being done in an orderly fashion, which can be more difficult for a woman among men.

Who are your role models and inspirations?

Naturally my first role model in driving was my father, who taught me. Along my journey, my father and my family have cheered me on and have been my main supporters both emotionally and financially, which has greatly helped me succeed. My close group of friends supported me emotionally as well, and their presence with me during practices and races has been very influential. People that were present along the way, such as my professional coaches have had a great role in my life as a racecar driver, be it through technical teachings or lessons in sportsmanship and morals. All of them have been very inspirational to me. When I face challenges, an accident or problems caused by an unfair ruling, they try to distance me from sadness and loss of hope and guide me back towards the right path.

What are the costs of receiving instructions in this field? Where are practices held? What institutions are active in this field?

In regards to instructing in this field, racecar driving is an expensive sport because it deals with the world’s latest technology, and that is the case all over the world. Preparing the car and the parts needed and all the items involved in this sport can be very costly, therefore it’s very expensive to instruct people. These costs affect the racers during practices and races. The location of the race track for the past few years has been at Azadi racing track, but with new tracks being developed, we will soon be able to compete and practice on other tracks. One of the most well-known tracks that is close to becoming operational is the Iranian Land track located in Zarandieh.

What has been your greatest memory or experience in this sport?

I have both good and bad memories from my career. Of course, my most enjoyable moments are when I cross the finish line first, or when I’m brought up on the podium, which gives me the sensation of summiting a mountain. Most of all, I enjoy interacting with fans especially after a victory, I enjoy taking pictures with them and becoming a part of their lives. 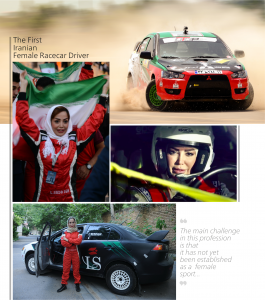