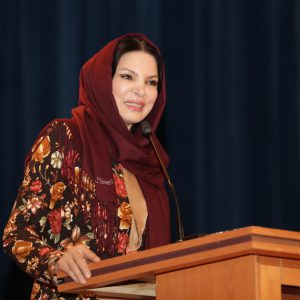 Behind the Scenes of

Soheila Jabri, also known as “Chia” is a researcher of ethnic costumes, teacher, fashion designer, and founder of Chia Mod and the Cipal Festival, the first private clothing and fashion festival in Iran.

Tell us about Chia Mod and your goal in forming it?

Chia Mod is an art and design institution with 35 years of experience. It’s in line with one of my most important goals, which is to create the groundwork for the promotion of Iranian fashion and its enhancement. My first collection was an adaptation of Iranian ethnic clothing with an underlying layer of modernity.

Can you tell us about the story behind your Shahrzad collection?

The Shahrzad collection shows the characteristics of ethnic clothing which include geographical inspiration and aesthetics, and utilizes the concept of clothing not as a covering, but as a cultural visual manifestation of ethnic groups. The collection is presented in the form of 32 different garments including tunics, caps, footwear and accessories. The clothes are designed according to social status, age and gender. Shahrzad is the story of a princess. Each design has a name and a story. The collection’s colors and designs illustrate fashion as an instrument to communicate different cultures and a language to express the nature of human beings and not just a covering for the unification of individuals. So far, this collection has been exhibited at the Saadabad Museum, the Tbilisi National Museum, the Hilton Istanbul Hotel, the Korean Ambassador’s residence in Iran and the Milad Tower.

Please tell us about some of your other collections, such as Tosan and Zemsan.

Continuing the path of Shahrzad collection, I created the Tosan collection. In this collection I narrated the life of a SOHEILA JABRI woman in one day in the form of 31 sets of clothing with an approach of real and everyday attire. In the Zemson collection, I started combining evening dress fabrics with winter covers. In the Chehel-Jeans collection, I showed the combination of denim with Iranian 40-piece fabric, which was held at the Economic Cooperation Organization, or ECO, on Women’s Day. Mahour collection is another experience I had with a focus on sustainable fashion and environmental protection.

What is the Cipal Festival and what are its goals?

The Cipal Festival was established to fulfill the demand for research, development and laying the groundwork for up-and-coming fashion designers, supporting the domestic production in the form of SMEs (Small- and Medium-sized Enterprises) and creating an educational environment to meet world-class standards for exportation and the need to create an infrastructure.
Cipal, is the first private fashionand clothing festival in Iran with the main focus of e-commerce andcyberspace. I personally have the responsibility of managing the festival along with the secretary of the festival, Khatoon Shahbazi.

This is the third year that Cipal is being held. Please tell us about the previous festival.

During the last two years of the Cipal festival, we have showcased 8,500 pieces. About 6,000 people have visited the festival and approximately 50,000 people followed the festival through social media. We had about 800 designers from all over Iran participating in the festival and 80 professors in different sections collaborating. Last year, we signed a memorandum of understanding with the Ministry of Cultural Heritage,Tourism and Handicrafts which will include cultural support and cooperation between the parties. Chia Mod is the only mentor and developer of fashion business in Iran.

Cipal is preparing its third event with the goal of identifying and introducing creative people, creating a platform for synergy and business development and maintaining a healthy, competitive platform. Similar to our previous routine, the festival will be held with the sections of clothing, jewelry, shoes and bags, accessories, fashion styling and forecasting. We are also introducing the new section for technology and start-ups.

Did you have any sales at the Cipal Festival?

Following the successful experience of holding the Sales Festival, which was held in collaboration with ECO on Women’s Day and ECO Day at the ECO headquarters, Cipal presented 3,000 clothes for sale at the festival.
In the Cipal exhibition section, there were two collections with the theme of peace, one of which was a combination of Iranian and other countries’ clothing and the other one was Chehel-Jean designs that both were very well received by the audience and brought up a cultural subject of conversation of clothing.

What is the Cipal theme this year?

The theme of this year’s festival is “Fashion and Architecture.” During the exhibition, multiple live conferences will also be held with the presence of professors and experts. In each section, comprehensive content has been provided to the participants for introduction and adaptation. This year we have dedicated a them. There will be a dedication of a statue to the Iranian teenage designer that places first at the Cipal festival. In the fashion styling section, an effort is made to highlight the importance of this group in the fashion industry.

The Cipal family predicts a bright future for Iranian designers and the fashion and clothing industry in Iran, which certainly requires collective effort.