From the streets of Tehran 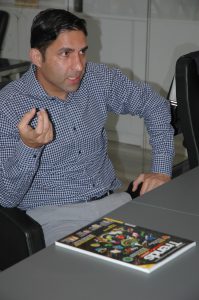 Coach of the National Football Team

Vahid Hashemian was born in 1976 in Tehran, Iran and has been interested in football eversince childhood. He was raised in the south of Tehran where there were not many facilities available, therefore playing with just a ball and goalposts was one of his favorite activities. Growing up, there was a grass field near him, where summer football camps were held. After discovering the field and watching professional players there, his interest in football bloomed and eventually he began to play professionally for domestic and foreign clubs. He is currently the assistant coach of Iran’s national football team.

Can you please tell us about how your professional football career started, and what achievements you are most proud of?

I have always been very interested in sports. I have tried martial arts such as taekwondo, karate and kung fu, but football has always felt different. Everything lined up smoothly for me to enter youth football with the Fath-Tehran team. I was invited to a tournament during the month of Ramadan through a friend of mine.

The teams consisted of only five to six people. Our team consisted of young players, including 16- to 18-year-old players, but the opposing team had many well-known players who had played in the national team games and Persepolis F.C. (Football Club), such as Reza Shahroudi who was also from my neighborhood along with Saeid Azizian, Nasser Abbasi and Najmuddin Bakhshi.

As our heated match came to an end, a gentleman approached me and offered me a place in his club. He mentioned that if I played for two years on his team, I would be ready to play for the Iranian national team. At first, I didn’t recognize him, but after he introduced himself, I found out that he used to be the coach of Naft F.C.’s youth team, and that he was currently the coach of Fath F.C.’s youth team. His presence that day was very coincidental. When I started playing for the Fath youth team, we were promoted from league two to league one and finished in third place that year. We then became the second runner-up among schools and clubs in Tehran.

During my time at Pas Tehran F.C., we became the second runner-up of Iranian clubs. From there I went on to play in Germany for Hamburg SV for a while, during which we became one of the top-scoring teams. Despite the difficulties I had in the first two years in Germany, nothing diminished my interest in playing in the Bundesliga. After playing for Hamburg, I joined the Bochum team, which was playing in the second league, and to me it felt like one of the greatest failures of my life.

However, our team later moved up from the second league to the first league, and while playing in the German Bundesliga, we won playing against F.C. Bayern Munich. Later I realized it was the right choice playing for Bochum because our performance with a smaller team was more recognizable, and it led to me going to Bayern Munich. After playing in Germany, I returned to Iran and won the National Cup with Persepolis F.C. in 2012. As a part of the Iranian national team, we became the West Asian champion in Jordan. In 2019, we became the champions of the Asian league in Bangkok. I also made it to the World Cup with the national team. I’ve always had a lot of discipline and perseverance.

How do you see the current situation of our football team and the coaching system of the national team?

The main reason I came back to Iran was to become the assistant coach of the Iranian national team, with the hope that I can have an impact on my country’s national team. The head coach of the national team, Skocic, has been in Iran for six years. I know him as a hard-working coach; he has an exquisite experience in the Croatian Premier League, Al-Nasr Saudi Arabia and Slovenia. We, as the technical team, are working harder than previous years. We analyze all the players and try to fully see their potential. At the moment we have divided the work due to the coronavirus and we are facing some limitations. Despite the difficult conditions caused by the pandemic, we’re still trying to have proper and practical planning, a high spirit of cooperation and an exchange of views.

What effects has the coronavirus pandemic had on football?

The coronavirus pandemic is an unusual experience that has led to the closure of many leagues and even led some teams to the brink of bankruptcy. The first damage was the elimination of television broadcasts, advertisements and spectators; most clubs’ revenue comes from these sources. This pandemic has also led to teams playing in empty stadiums. If the coronavirus pandemic is not controlled soon, it will hit football even harder.

How can we improve Iranian football teams?

We should consider football as an income-generating industry. We need expert managers to train professional coaches. Without a well-experienced coach, we cannot have a strong team. In addition, it is very important for the players to have a professional mindset and not be too concerned with social media and the press. The reality is that what matters the most is what happens on the football field. Discovering new, talented athletes and developing their skills is a must. In my opinion, Iranians can really make great progress if they work under an organized program. I believe that Iran’s football teams have great potential. We must strengthen the academies so that the basic teams can build good players.

In your opinion, how different is the budget and facilities of our neighboring countries from ours?

In other countries, one of the main sources of income for football teams is the right to broadcast on television, which provides the clubs with more funds to purchase better players.

In my opinion, inviting experienced foreign coaches and players could help our teams improve their technique.

If that cannot take place, we should spend most of our budget to discover talented athletes and nurture young players. One of the biggest issues our football teams is facing is a lack of budget; clubs themselves must be able to generate revenue.

Why haven’t we had a superstar in Iranian football for such a long time?

We have always had good players in Iran but we have not had a chance to be in the World Cup for many years. When Iran advanced to the World Cup in 1998, it was such an amazing and unforgettable experience for the Iranian people and it really made the players of that period famous and memorable. Back in the day, people used to watch more football, but nowadays, people have become busier in their daily lives. We do have many good players, but I think people are generally less interested in football.

What is the greatest obstacle in the success of Iranian football players abroad?

We have had a lot of successful and unsuccessful players who played or still play for foreign teams. Unfortunately, some of them were discovered too late. I think they would have been much more successful if they had gone to play for European teams as teenagers.

Compared to the past, the development of mass media and information exchange in cyberspace has also expedited            the discovery of new players.

What are your favorite international teams?

As a child, in addition to the Iranian national team, I was a fan of Germany and Argentina. I also loved the clubs of A.C. Milan and Bayern Munich.

What are the future plans for Iran’s national team?

We have good players who have a lot of special characteristics and are great at working under pressure. Our players play with pride, so I think the future will be bright despite our difficult circumstances. The official matches of the Iranian national team will possibly be in April 2021. However, these games have not yet been officially scheduled due to the coronavirus. We will have four games and each game is going to be difficult and has to be taken seriously. I believe Iran will play well. 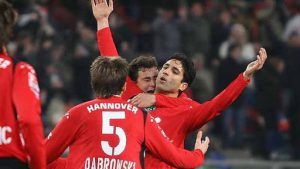 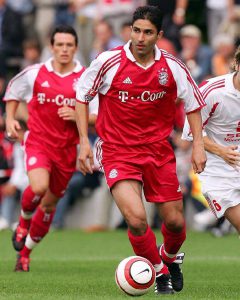