A Brief History of the Argo Factory

Argo Factory, a once active beverage factories in Iran in the 1960s and 1970s, was one of the first industrial plants in Tehran. The factory, with its distinctive architecture of tall chimneys and its unique geographical location in the city center, was neglected for years. And abandoned for past forty years, it had turned into a dilapidated building. But Argo Factory’s fate was tied to a much brighter future, and all was not lost for it. The factory started its activity as a beverage factory in the 1930, but the history of the building goes even further back. According to evidence uncovered by “Tehran’s Cultural Researches” team, the building had previously operated as an iron making factory, although establishing a definite date for it was not possible. 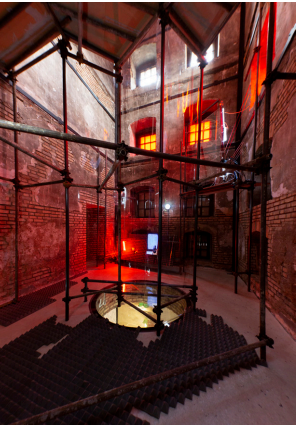 The Argo plant is located in the old part of the city and is of great importance in terms of “Tehranology”. During the period that the factory was in operation, there were very few industrial plants in the area, which made the conservation of this building to facilitate the chronicle and study of the region’s industries more important. According to available evidence, former owners of Argo Factory were influential businesspeople and had a great impact on development of the areas around the factory. Political conditions of the country also had direct repercussions for the operation of the factory and thefallout can be seen in the transformation noticeable in the surrounding areas. With the expansion of the city and the surge in development of residential areas during the mid-Pahlavi period, the operation of this building was stopped and it was forced to relocate to outside the city and a more industrial zone.

After the relocation, the building was utilized as a retail store offering Argo products. The Argo Factory store was operational until one year before the Iranian Revolution in 1979 at which time it shut its doors. The building remained abandoned until 2016, when the Pejman Foundation, a Tehran-based organization focused on support of artistic and cultural events, purchased it with the aim of transforming the industrial space to a cultural one. In line with its ambitious goals of creating an exhibition space and a cultural center, the Foundation decided to renovate and revitalize the Factory’s building. Rehabilitation and temporary re-opening of this building began in October 2016 and soon three exhibitions were held in the semirenovated space of the factory that same year. In the winter of 2018, a more comprehensive restoration and renovation of the building began under the supervision of architect Ahmadreza Schricker (ASA North) at the request of Pejman Foundation. The emphasis of the restoration was on preserving the originality of the Argo Factory building with special tribute to the old city fabric of Tehran, making it an ideal venue for the ‘Argo Museum-Gallery’. Pejman Foundation hopes that with a new functional purpose for the old building, the cultural impact of the structure in the region will be better felt this time around.

Introducing Pejman Foundation and its role and activities

Pejman Foundation began its activities in 2015 with a focus on contemporary Iranian and international art. Throughout recent years, the activities of Pejman Foundation have expanded beyond building its collection and its grant and sponsorship programs. Through the organization of workshops, lectures, and panel discussions, invitation of international experts, its artist exchange programs, as well as its support for cultural research and publications, Pejman Foundation has become a creative hub for art practitioners and initiatives in Iran and abroad. Today, Pejman Foundation supports art and culture through a vibrant program of exhibitions, talks, and events at its multiple locations including the Argo Factory and the Kandovan Building.

Argo Factory activities and examples of its successful programs

Argo Factory is a non-profit cultural institution, housed in a former beverage manufacturing plant in Tehran. Argo Factory is part of Pejman Foundation’s constellation of sites. Argo Factory was one of the major beverage manufacturing factories in Iran during the 1960s and 1970s. The construction of the building itself dates back to early 1920s as one of the first industrial plants in Iran. In spite of its unique architectural features – high smokestacks and strategic geographical position at the heart of the city – the factory was taken for granted for many years, and it eventually turned into a tumbledown building for almost four decades. In 2016, Pejman Foundation acquired and restored the Argo Factory and turned into one of its multiple functional sites.

Pejman Foundation: Argo Factory was proud to present “Elsewhere,” an 83Trends/Issue No. 5 / Spring 2022 augmented reality, a transformation of the status of the image – alive and no longer representing – has taken place, questioning the limits of reality. interactive virtual reality installation by artists Hayoun Kwon (South Korea/ France) and Balthazar Auxietre (France), and curated by Emad Aleebrahim. With the use of VR technology, the artists sought to create poetic illusions based on human memories and establish a direct and reciprocal connection between the audience and the artwork. In this interactive installation, and through use of VR headsets, the participants had the chance to immerse themselves in complex experiences. These were personal experiences not happening in front of images but physical ones taking place inside those poetic compositions! The exhibition was set up as “installations” within empty spaces – which the curator called “time capsules” – and every virtual reality experience was confined to one of these spaces. While waiting to be immersed in these VR illusions, participants were able to take part in the experiences of the group before them through a different medium and from the “outside world”. “Elsewhere” was made possible through the generous support of the French Embassy in Tehran and was supported by Samsung. 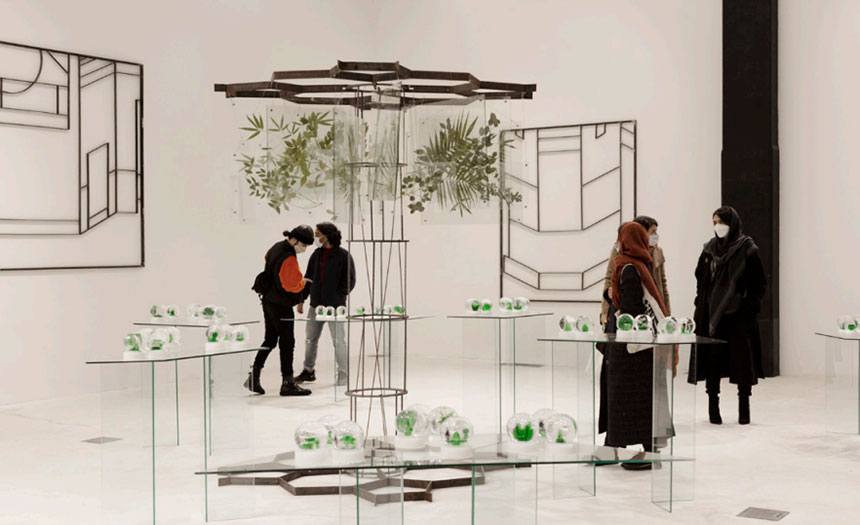 At the invitation of the Pejman Foundation: Argo Factory, the Musée d’Art Moderne de Paris presented the exhibition “Video at Large” based on a selection of videos from its collection. The project focused on large format images and the immersive display surrounding them. Video art has always been directly linked to its specific arrangement, which lends itself to the theatrical nature of a moving image and its encounter with the public. Likewise, in the dark room space, the visitor occupies a central place. In this context, the films of Philippe Parreno, Apichatpong Weerasethakul, or Angelika Markul replicate the conditions of the camera obscura in which the allpowerful image acts on an enraptured audience. Sometimes, multiple projections shape the space and manage a “conversation” between the images, as in the case of Isabelle Cornaro, who uses a diptych. Architecture can also generate a setting in a three-dimensional space. To include a video in a building backdrop is to explore another aspect of this conversation on a monumental scale and trigger intense emotions. 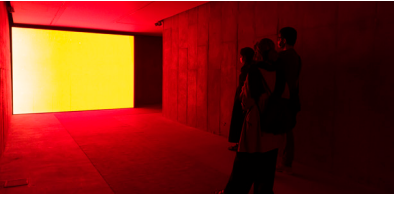 The two sculpted screens which frame Meriem Bennani‘s film, are evocative of a ziggurat and produce, in a game of mirrors, a “fractalisation” of images. By choosing to screen the film of a cat lapping milk in Times Square (New York), Peter Fischli & David Weiss raise a visual shock that relies on shift and humor. In the same way, Ariane Michel‘s screening of an owl, initially shown on the pediment of the Jeu de Paume museum in Paris, plays with strangeness and explores the borders of the natural and the cultural. The projection space gradually turns into dynamic and sensorial surroundings. Consisting of various points of view (close, far, opposite…), Ange Leccia works with a moving camera or takes aerial shots by drones, which juxtaposed with the soundtrack (Nicolas Moulin, Anne-Charlotte Finel), create a strong interaction between image and the viewer. Forging a total art experience, the video installation seeks to provoke an active participation of the body: the viewer becomes an actor. Technological innovation is one of the factors in transformation of the artistic practices. From digital insertions (David Claerbout), to morphing (Christian Boltanski) all the way to the recent experiences of virtual reality and augmented reality, a transformation of the status of the image – alive and no longer representing – has taken place, questioning the limits of reality.

Argo Factory, like many other businesses, was forced to postpone many of its exhibitions and future plans due to the Covid-19 pandemic. Border restrictions prevented artists and curators who collaborated with the Pejman Foundation from traveling to Iran and present their work and this disrupted all prior arrangements. However, installation of the exhibitions were organized where and when possible with digital tools (virtual tours, filming and video sessions). Difficulties in preparations were not limited to the pre-production stage of the exhibitions; even after the opening and execution of the exhibitions, any one of them would have to be suspended for a period of time due to the limitations imposed by Covid-19 Control headquarters. These delays invariably postponed the closing of the exhibitions and, as a result, hampered the formation of future plans.