Abstract Point of View on Architecture

Mitra Ghorbani is an architect who is well known for her works in District One and outside of Tehran. She has been working in this field for years and has managed to make a name for herself.
She is one of the only women present in the field of residential construction that handles a project from the construction phase to the finishing, and decoration. In addition to being a success in the male dominated field of construction, she is also an artist and philanthropist.

Thank you so much for giving Trends this exclusive interview. Please introduce yourself, and tell us a little about yourself.
How did you become interested in architecture?

To be honest, I was interested in law, but I got accepted into university for architecture. I grew up in an artistic household, as my father was a fan of painting. With my background in art I decided to pursue architecture and became more interested as I furthered my studies. I began working right after graduation, and with a bit of luck I was immediately involved in big projects. At first, I wasn’t used to field work and primarily spent my time designing, but that quickly changed as I became more involved with the projects. After a few years I established my own firm and began working independently. It seemed scary at first but after getting a few projects it didn’t seem that bad. My first project was designing and constructing a villa, in the Damavand region, and from there the projects started coming in.

What has your experience been like as a female in a male- dominated field?

It is hard to accept women in some occupations, especially in a male-dominated field such as construction. As a woman, especially a petite one, some of the colleagues can’t fathom that I could have knowledge of field work; many of them would assume that I only designed and know nothing of the construction process. I always try to experience and learn all the different procedures that go into building a structure. I have gone to remote regions to visit stone mines to get a feel for the materials being used. I tried to learn the details of construction from the craftsmen so later on they wouldn’t question my practical knowledge. At first it was difficult to gain their trust, however as time went on things changed. They saw me as an equal and began respecting me. I’m very strict at work because I am a bit of a perfectionist.

Is there a difference between your work and everyday life personas?

I tend to have more of what we would call masculine traits in the work environment, but on the outside, I am more let’s say feminine. The clash of these two personas causes me to act like I’m still at work even when I am not. Thanks to my friends I am sometimes reminded that work hours are over. The charity work and playing piano helps balance my feminine side, which is a nice contrast to my work. I have even tried acting and other art forms to keep my feminine side alive.

Has COVID-19 had an adverse effect on your line of work?

It might have had an effect on property sales but as far as construction goes it seems like the virus hasn’t yet reached our field of work. Of course, more health and safety protocols are in place
but overall, not much has changed. We only felt the effects of the virus when construction sites were forced to shut down for a month during Nowruz. Even then, we kept one of our construction sites for a charity open because providing shelter for the children was not something that could be put on hold. 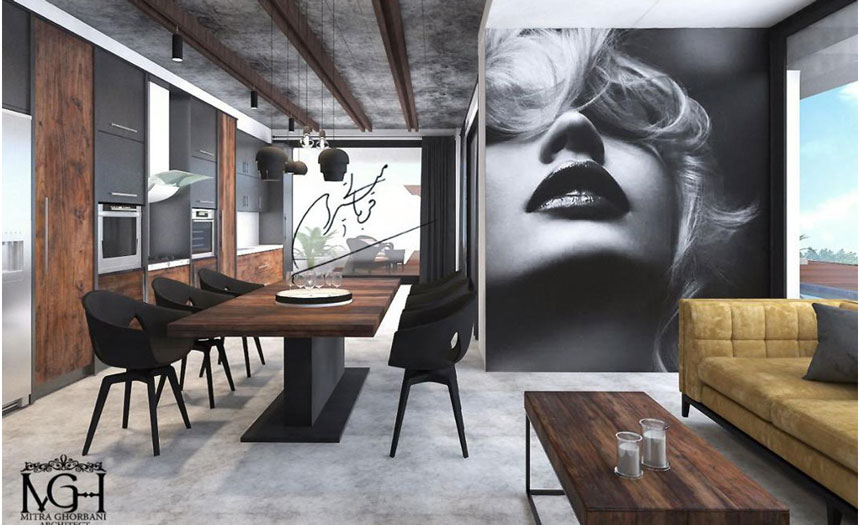 How have the sanctions affected your field of work?

Before the sanctions, we had little to no restrictions, we would import all the materials, you would barely see any domestic products being used in district one. From ceramics, stones, to faucets and, etc. everything was imported. One of the things that set us apart was our relations with international brands and how well we could acquire the materials.
After the sanctions a huge shock was felt which led to us using Iranian products, which to our surprise were if not better at least comparable to their international counterparts. It also led to people going towards increasing domestic production to fulfill the absence of the imported goods. Even smart home systems are now being produced domestically. I was skeptical at first but after trying the domestic products I placed my faith in them. I’m not sure if the quality necessarily increased drastically during the sanctions or whether they were high to begin with but they definitely didn’t have the branding and marketing power of imported goods.

What are some other restrictions you face during a project?

There are limitations both in lack of technology and know-how. We have to design around those limitations. We can’t execute the same projects here as with other places. For example, I have had projects abroad in Vienna. You have to take in the materials and the capabilities of the labor force when designing a project. Materials aren’t the only limitations; the machineries are also a factor. In order to complete some projects, you need to import the machinery.

I believe that
it’s the challenges that make work interesting,
if you have everything that you need from the beginning where is the fun?

Another restriction is the over- involvement of the clients in the projects. They make decisions based on things that they have seen and often ask for replications. For instance, I like Iranian facades but what most clients enjoy is stone, which they consider to be luxurious. It’s a part of the culture of always comparing ourselves with others. This problem is more prevalent when it comes to facades and interior design.

How has the interior design industry changed over the past few years?

There has been a rise in demand for interior design especially in Tehran, but it is still not where it needs to be. People hire designers but end up with what they had seen somewhere else. There needs to be certain trust which hasn’t seeped into the culture. People didn’t used to believe in paying for a designer but with the ever-increasing property prices people have begun to spend money in this regard more freely. People are still reluctant to pay but nevertheless there has been more demand. Besides in Tehran other smaller cities have also had a rise in demand for interior design but the price of these services doesn’t match the property values as well as they do in Tehran.