Art as A Way of Life

Iranian painter Fereydoon Omidi was born in 1967 in the city of Roudbar, in the Caspian region of northern Iran. From an early age, Fereydoon was drawn to painting, experimenting with different mediums from oil paints, watercolors, graphite pencils and so on. After graduating from high school, Fereydoon pursued his passion at the Art School of Azad University in Tehran, majoring in Graphic Design. Experimenting and fine-tuning his own style of painting, he continued his education and received his Master’s degree in 1998 and started to teach at the university while pursuing his painting projects.

Fereydoon’s love of painting and appreciation for all forms of art is a way of life for him. For Fereydoon, art provides a path to a better quality of life through refinement of the human spirit. He is an “experimentalist” using various tools and mediums to give form to his thoughts and imagination on the canvas. 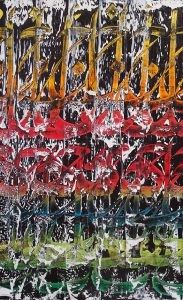 Fereydoon believes that modern calligraphy should be considered an independent art form and has comingled this medium with Persian modern painting techniques to create a new way of looking at this area of artistic expression. Always trying to perfect his art and his methods, he uses large amounts of oil paint on canvas to transform standard letters of Persian alphabet into intense and decorative forms that, at the beginning, shock and appall the viewer, but gradually excite and entertain her, and play games with the viewer’s perception through repetition and rhythm of his bold lines. Fereydoon “designs” his paintings and creates art that connects with its surroundings through a synergy influenced by current events.

Calligraphy and script writing are abstract elements for Fereydoon.  In fact, Persian alphabet resemble symbols and this aspect of their character is best demonstrated through “Siah-Mashgh” which is a calligraphic practice of filling a page through repetition of a single letter or word.

Fereydoon uses this linear form of repetition on a single surface to create a visual motion with its own rhythm. The rhythm of repeating letters, words or lines of script establishes a motif, and the correct application of paint in specific colors and amounts adds to the depth and dimension of the work itself.

The prolific and rich career of Fereydoon Omidi includes over 25 solo shows, and over 50 group exhibitions 22 of which were outside Iran.  Fereydoon has had two solo exhibitions in 2016 and 2019 at the E1 Gallery, and a group exhibition at the same gallery curated by Fereydoun Ave. Several of Fereydoon’s pieces have been sold at the much acclaimed Tehran Auction in recent years.