Mahla Zamani Nia is a fashion designer and expert on traditional clothing. She believes Iranians need to revive their past and dress in elegant and traditional styles that focus on Persian and Baluch dress styles. Some of the inspiration in her designs comes from Baluch embroidery.

Iran is ancient and vast with various climates where people have their own conventions and dialect and show their own culture and art. Areas that are tropical or cold and mountainous or desert areas differ from other regions in regards to the architecture, decorations, colours, designs, even tools and their use of fabric. The art of embroidering is one of the most influential art forms. Baluch embroidering is a native and original art and the types of embroidery which were done were some of the first weaves of humankind. We can see these patterns are massively present in brick work and rugs from different areas of the world, particularly Iran and Anatolia. Nowadays, you can find great influence from embroideries similar to the handwoven objects of the Baluch. 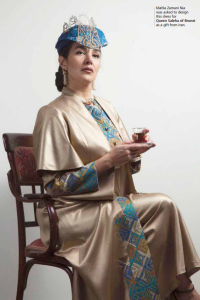 These are maintained at the border of Central and South American countries today. What is interesting is the similarities between the patterns woven by Red Indian women, who preferred geometric patterns, and men, who preferred more realistic patterns, and the hand embroidered pieces from the Baluch tribe. In regards to general patterns and colour palettes of Baluch embroideries and other nations, we come to one common conclusion that all people, using the simplest forms and lines, try to send their message and communicate their identity, cultural and historical development of their people and nation. The origin of patterns used in embroideries is inspired by nature and the reality of the environment around artists. The patterns are mainly a reflection of imagination, wishes, images, images of the mind, epic and holy mythology, lifestyle, rituals and beliefs which symbolize the imagination and fantasies of embroiders and their ancestors.