Christian Vit -The profile of an International Actor- 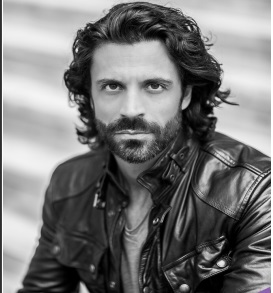 Christian Vit was born in Venice, Italy. He had his first performance at age five. When he was 10 his parents sent him to London for a three-week course to study English. Vit has a master’s degree in public relations, consumerism and publicity at the University Institute for Modern Languages in Milan. He is fluent in Italian, English, Spanish and French. His first film, “Sons and Daughters,” was in Milan in 2001. After this role, his acting career continued with many theatrical productions, a number of Italian TV series and films. In 2014 he moved to London and two months later was offered a role on the hit TV show “Game of Thrones.” This led to other projects including “Crossing Lines,” “The Job Lot,” “Holby City,” the BBC sitcom “The First Team,” and the upcoming films, “Marriage Material” and “Summer in Rome.”

Thank you so much for giving Trends this exclusive interview despite your busy schedule, we are very grateful. Could you please introduce yourself? Tell us about what inspired you to become an actor.

My name is Christian Vit and I’m an Italian-born actor based in London. I started my professional career in Rome several years ago. I’ve played in movies, TV series and stage productions but, so far, the projects that have been giving me more exposure are TV roles. When I was a kid, I bumped into a movie set in a city near Venice and I had a very strong feeling; I didn’t know why and didn’t really understand what was happening but that day I got back home extremely intrigued and so excited that my legs were shaking. That feeling stayed with me for days. It was a sort of a revelation, the first ring of a bell that started to call for my attention for years to come. When I decided to take that call, I realized that mine was the case where acting chose me, not the other way around.

What is your approach to acting? How do you get into character?

I’ve been trained as a method actor and also as a stage actor. My goal is always to deliver the most truthful and compelling performance so my work always starts with researching and understanding the previous, current and future circumstances related to my character. Then, I try to establish an emotional connection with the character, digging into what we have in common and what we don’t have in terms of life experiences, attitudes, feelings, etc. Of course, the script analysis is very important as well and marks every single scene with what stage the character’s journey is at and what the emotional “temperature” is at that point. It’s a lot of work, both intellectually and emotionally, engaging and committing to such work. Then, for line memorization, in order to create the best performance and to feel free and confident you really must know the script by heart.

Due to your proficiency in multiple languages, are you interested in working on international projects?

Being able to speak different languages and to play a range of different nationalities has definitely been a great asset for my acting career especially since I moved to London. I have representation in several countries so my luggage is always ready when the right project is happening. The more international the project, the better. What was your experience like on the set of “Game of Thrones”? “Game of Thrones” was the first job I booked when I moved to the UK. I was very excited because it was the mark of a new beginning in my career in the country. Initially, I didn’t have an exact idea of how big the show was worldwide. I remember when I went for the fitting in Belfast for the first time, my costume was hanging in the middle of the room like a sacred object. 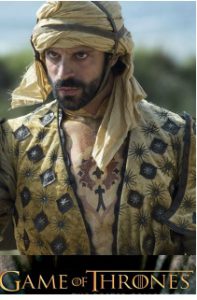 It was simply magnificent and I admired all the artisanal work that had been put in it. There were two people helping me with putting it on and when I was ready, I felt in character right away. That was my first experience with the production. Then, I was sent for a “checkride” as all my scenes were meant to be on a horse and the production team wanted to be sure I could ride on horseback properly. The shooting began a few days later in Port Stewart, a location in Northern Ireland by the sea with beautiful sand dunes, and was a two-and-ahalf-hour drive from Belfast. The experience on set was just amazing. Everyone was so professional and every single detail was looked after so well. We were also blessed with a few glorious sunny days in a row which made the whole shooting process finish quicker than expected. Despite the fact that my role was just for one episode, the whole experience was superb and I could tell I received what I’ve later on understood as “the full Game of Thrones treatment” including scenes on a horse, lines with the main characters and a cruel death.

What has been your most memorable experience as an actor?

Besides the Game of Thrones experience, which, of course, for me has been very memorable, I also have to mention my role in “Holby City” as Dr. Matteo Rossini. Holby City is a very popular BBC One Primetime TV medical drama which has been running for the past 20 years. It’s considered the “English ER.” My character arrived at his first shift at the hospital on horseback carrying a patient. That was a very memorable entrance considering that it was the first time a horse was brought on that set. Also, I was joining a regular and entirely British cast who had been working together for a while so I had the big challenge of modifying my accent nicely and smoothly with theirs. I worked a lot on my English to keep a hint of an accent in order to sound charming but also very clear and well-spoken. On top of that, working on that character for 44 episodes allowed me to empathize with him on a very deep level.

The journey has been fantastic. What are some of the difficulties and challenges you’ve faced as an actor?

Being an actor always presents difficulties and challenges. First of all, I had to understand how to deal with the rejection that actors constantly have to face, no matter what stage they are at in their career, and how to not take it personally. I’m still trying to understand how to do it some days. Jokes aside, I’m getting better and better with that. Then I had to understand where I could have the best opportunities according to my look, my accents and languages – that meant I had to take risks, go to other countries and be brave. There are moments of ups and downs that put my patience and emotions to the test. I had to learn to trust my intuition and keep going with the flow even when the moments are particularly tough.

How has the coronavirus pandemic affected your personal life and career?

I’ve been spending the whole lockdown alone in London. My parents and sister are in Italy, and thank God, they are all in good health. I’ve always been a sort of a lone wolf so I’m used to spending time by myself and it’s something I enjoy. Of course, the whole situation is not ideal as I miss my busy social life too and spending time with the people I love, but at the same time, it is a great opportunity to re-group, step back and think of what is working and what is not, what is still serving me and what is not and preparing to make all the adjustments for when things will be ready for a new fresh start. I believe it is important to live in the moment but in situations like this, it is also nice to think and dream about the future, evaluating new perspectives and new ways to approach things that before might have not been working or going towards the direction I wanted. Almost everything has stopped work-wise, but fortunately I was not filming or involved in a stage production that suddenly had to be interrupted or completely canceled because of the pandemic. I have quite a few colleagues that have been through that and of course it’s something you never wish to happen. Things for creatives are uncertain and unstable on a regular basis, so imagine how it is now. I think the pandemic will definitely set different rules in place within the movie industry, affecting almost every aspect of production. It will be very interesting to see how the whole thing will work as it is totally unprecedented. I believe the need for content creation to fulfill media platforms has increased with the lockdown, and the industry will have a lot to catch up with as soon as it reopens at full capacity. This whole situation, besides not being ideal of course, I’m pretty sure will also bring something positive at some point, in terms of new insights and experimentations.

What project(s) are you currently working on?

I’m currently involved in a project that is going to be filmed remotely. During this odd time of lockdowns, self-isolation and social distancing, one can be also very productive from a creative point-of-view, giving birth to experimental projects. This one will probably take the direction of becoming a web series and I found it very interesting to be asked to participate. So, besides reading scripts and self-taping for projects that hopefully will be happening when the pandemic is over, I can say I’m filming without being on a proper set and without being surrounded by a proper crew.

What do you do outside of acting?

Besides acting in front of the camera, I also act with my voice in different projects: audio books, radio commercials, audio guides, video games, podcasts, corporate speeches, etc. I support some charities and am often asked to speak at their events. I attend movie festivals and sometimes I’m part of the jury. I’m also a foodie and a professional sommelier, but only for my own enjoyment. I love cooking; I feel very creative when I’m doing it, and I’m always happy to talk about good food. Of course, I also exercise a lot to stay healthy and in shape as it is crucial for my work.

What’s next for Christian Vit?

I’ll be appearing in one episode of a new BBC sitcom called “The First Team,” by the same creators of the popular show “The Inbetweeners.” It will air between the end of May and the beginning of June. It’s a very sharp British comedy. I had so much fun filming it. Despite people thinking I have a very “dramatic look” I really enjoy playing in comedies. Other than that, I’m attached to quite a few projects, particularly a movie that will be shot in Rome and will be a great acting experience for me. Let’s see what happens when things will get back to normal. Do you have any advice for aspiring actors? I have three pieces of advice for aspiring actors. Ask yourself: 1) Are you sure you want to be an actor? 2) Are you REALLY sure you want to be an actor? 3) Are you REALLY REALLY sure you want to be an actor? If the answer is YES to all the three questions, then prepare yourself for an amazing yet crazy journey. Expect no rules, don’t compare yourself to others, surround yourself with people that love and support you and be professional, reliable, generous, humble, consistent and resilient. Ah…Don’t forget to enjoy it and have fun! Good luck.