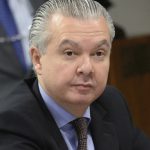 H.E. Ambassador de Azeredo Santos, thank you so much for giving Trends this exclusive interview despite your busy schedule, we are very grateful. If you were to summarize the state of affairs between Iran and Brazil, in terms of political relations as well as trade activities and cultural exchanges, how would you describe it?

Brazil and Iran have always had very good political and diplomatic relations. We had some high-level visits, for example, the Minister of Foreign Affairs, Dr. Zarif, was in Brazil about 2 years ago. This year we are expecting some technical meetings in Tehran and visits from the Brazilian Minister of Agriculture and the Ministry of Health of Brazil, who will be coming to Iran to discuss bilateral cooperation on agriculture and health.

I would say the political relations are still going very well. We had a change in the Brazilian government last year, a change in presidency, and each president has their own orientation in terms of foreign policy. As far as Iran is regarded, I can tell that it is being very pragmatic. We consider Iran a regional power and important partner and we want to maintain our positive political and diplomatic relations.

Do you see any major emerging trends or patterns for example, the expansion of trade beyond meat and agricultural commodities into other sectors?

Due to the sanctions, there are exports coming from Brazil to Iran through third countries. We would like to see these coming directly so as to reduce costs. This figure can increase rapidly because of the potential of the market in Iran. We are also working to have good cooperation on other areas such as pharmaceuticals, medical devices, medical equipment, products for agricultural machinery, irrigation, water treatment and goods and services for other sectors which are not under sanctions.

What do you see as the biggest hurdles on the way of doing business between the two countries?

First of all, I would say the biggest hurdle is the lack of information on both sides on the potential of business between the two countries. I believe Brazil and Iran may not exactly know all the business opportunities that they may find in both countries. This is something that we have to overcome by spreading information, participating in fairs and exhibitions and organizing trade delegations. This is very important because, as I said before, our bilateral trade is very concentrated in Brazil’s exports even though there is a potential of Iranian exports to Brazil. This has to do with the second hurdle, which is the sanctions. The sanctions make it very difficult, for example, for Iranian exporters to export products that Brazil imports from other countries including products such as Rea, bio-oil products such as Diesel and petrochemical products. We could have a better balance of bilateral trade but because of the US sanctions, it is more difficult. Finally, the banking relations are a big hurdle.

Today, we have two Brazilian banks that have corresponding relations with Iranian banks. They also use European banks as an intermediary for exchange, operations and transactions in Euros. But of course, this is not enough. It’s good that we have them, they are doing a very good job and helping to keep our bilateral trade. However, we need more alternatives including financing, which we are working on as well, and establishing a mechanism that can facilitate financing of Brazilian exports to Iran. We’re still working on this and have an ongoing dialogue with the Iranian government on this subject so, hopefully, we can have some mechanism in place soon.

You are among the very few diplomats who visited Iran several times in the past 10 years and long before your Ambassadorial tenure. Tell us about your overall experience please. Have you observed major changes between Iran today and 10 years ago?

Yes, I have visited Tehran many times before I moved here as an ambassador. What I can say is that with every visit I could feel the hospitality and kindness of Iranian people. This made me comfortable during each visit I had to Iran, not only in Tehran but also Isfahan, Shiraz and many other places. In terms of differences, of course, 10 years ago there was a different political situation in Iran. There was a conservative president, and compared to today we can see more tolerance to some behaviours, especially in young people. During the past decade, social media has also become much more popular and accessible to young people in Iran and this brings some changes in the behaviour and even the business environment. Ten years ago there was also a complicated period for sanctions, not only from the US but also the EU. They worked together on sanctions against Iran. Lately, we know the situation after the JCPOA didn’t really reach the point that Iranians were expecting. We could develop more businesses with Iran in the past 4-5 years than 10 years ago. The level of our bilateral trade has practically doubled, if you compare the figures from a decade ago with the figures we have now. On both sides, we have done a lot during this time to improve our trade and economic cooperation.

What do you see as the opportunities and challenges for Iran in 2020 and beyond?

Well, there is no doubt about the economic potential in Iran but as we know, the biggest challenges, I believe, for Iran in 2020 would be reaching an agreement with the US and European countries in regards to the nuclear agreement, and also achieving peace with neighboring countries. Therefore, I would say the biggest challenge in 2020 would be on the political side, both internally and externally.

Another important challenge for Iran, internally and domestically, would be introducing some economic reforms. There are many economists and analysts that rightfully say that Iran’s economic problems come, not only from the sanctions, but also from the lack of reforms in the economy. In the fiscal area, for example, solutions would include introducing more productivity, efficiency and good governance in the business environment. In order to again become part of the international, let’s say “financial” scenario, Iran needs to approve those important legislations of the Financial Action Task Force (FATF). There are many challenges that Iran will face but I am sure the Iranian government is paying attention to these and will put in their best efforts to reach those goals.

What is the trade volume between Iran and Brazil today? What would be the potential if the sanctions were one day gone?

Bilateral trade last year, from January to December 2019, reached around 2.5 billion USD, mostly represented by Brazilian exports, as I previously stated. If the sanctions did not exist, I would say that we could easily double the exports and could import a lot from Iran, maybe reaching a balanced trade. I would say in the short term, it could easily go from 2.5 to 6 or 7 billion USD with more Brazilian exports and, improving rapidly, Iranian exports of chemicals, petrochemicals and biooil products.

Are there any business delegations visiting either side these days? If so, in what sector(s) and when? 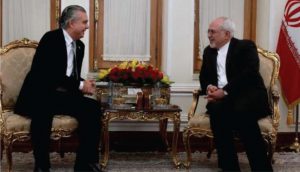 As I mentioned before, we are working on delegations on the health sector with the Brazilian Food and Drug Administration representatives coming to Iran and representatives of the Brazilian Ministry of Health following up on a meeting that we had two years ago in São Paolo. The Brazilian and Iranian Food and Drug Administrations signed a Memorandum of Understanding during Minister Zarif’s visit to promote and facilitate cooperation in the segment of pharmaceuticals and medical devices. This year we are planning to have a technical and business delegation on the health sector in Iran.

Are there any major cultural, artistic or sport activities between the two countries planned for 2020?

In terms of cultural cooperation, the ambassador in Iran has been very active in the last 2 years. We had a Brazilian movie festival in Tehran, Isfahan and Shiraz. It was very successful; we showed 10 Brazilian movies. This year we are planning the second Brazilian movie festival. We’ve also had some attractions and people coming from Brazil. Yamandu Costa, today considered the best Brazilian guitar player in Brazil, was in Tehran 2 years ago. We also had a group of Sertanejo, which is a typical Brazilian music style and this group was in Tehran last year. One of Brazil’s best saxophone players visited Tehran last year. Altogether, we have been very active in the cultural sector.

This year we are planning two photograph exhibitions. In April, we will celebrate 60 years of Brasilia, the Brazilian capital. We also had a book about street art in Tehran and São Paulo. An Iranian photographer came to São Paulo to take pictures of the street art and a Brazilian photographer went to Iran to do the same. We printed and launched this book in Tehran.

The embassy of Iran in Brazil has been very active in bringing Iranian musicians to Brazil. There’s been a lot in the cultural section and on tourism as well. We’ve been encouraging Iranian tourism to Brazil and Brazilian tourism to Iran and have noticed that last year there was an increase of Brazilian groups going to Iran. There is a lot of interest in Iranian culture, which is very positive.

When it comes to football, there seems to be a fascination among Iranians, especially among the people of Abadan, about Brazilian football. In fact, the obsession in Abadan is such that they consider Brazil a part of Abadan! Any ideas where this has historically come from? How do you feel about it?

Abadan is a special chapter in our bilateral relations. I had the privilege and honour to visit Abadan last year. I was very impressed and, more than this, I was touched by the sympathy and love that they had for Brazil. It was very nice to see the people in the stadium, in the streets and the shops with Brazilian flags. We are working on the follow-up of what we discussed last year in Abadan, for example, cooperation between Abadan and the city of Santos. Santos, the club of famous football player Pelé, has a good track record with the social inclusion of poor kids. These kids participate in a football program in the Santos club where they are educated alongside practicing football. This is something they could bring to Abadan. Santos is also a port city, very similar to Abadan in terms of population, a bit larger than Abadan but they have a lot of similarities. We’d also like to bring a Brazilian film festival to Abadan like we had before in Tehran. We’d like to keep this relationship with the people of Abadan who love Brazil. 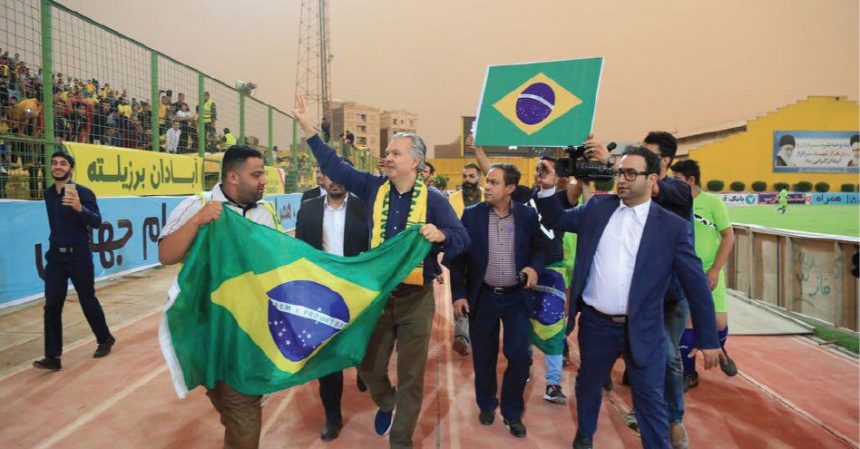 Can we expect further improvement of relations between Iran and Brazil in the foreseeable future, given the challenges including political climate in both countries, sanctions, etc.?

I do believe that we can improve both our political and economic cooperation. We are working for this; there is a lot of interest from both sides to improve the bilateral relations in many aspects. There is no doubt about the potential of trade relations. The capacity to improve it would depend on how we can overcome the hurdles that I mentioned before, but, yes, we are finding solutions and alternative ways to improve our trade relations. The political relations have always been very important and good between the two countries and still are very important for us and Iran. In multilateral organizations, we share common positions, exchange votes and are planning some delegations to come to Iran this year. However, it is also very important to follow-up on the political discussions that we have had before on very important segments of our bilateral relations. Yes, I do believe we can improve in both ways.