Kish Island’s strategic geographic served as a waystation and link for the ancient Assyrian and Elamite civilizations (1,500 BC) as their sailboats navi- gated from Susa through the Karun River into the Per- sian Gulf along the southern coastline, passing Kish, Qeshm, and Hormoz islands. When these civilizations vanished, Kish Island’s advantageous position was lost and for a period it was subjected to turmoil and the tyranny of local rulers and other invaders. The es- tablishment of the Achaemenid dynasty (550-330 BC) profoundly affected the Persian Gulf and it didn’t take long for Kish, in particular, to be linked economically and politically with the civilizations of the Medes and the Persians at the height of their power.

Kish, like the other Persian Gulf Islands, is located on a narrow strip of tropical vegetation in the Northern Hemisphere, with the Persian plateau to the north and the Arabian Peninsula to the south.
The island has a very dry semi-equatorial climate with little rainfall. Temperatures throughout the year range from lower 70 degrees Fahrenheit in the winter months, to high 90’s Fahrenheit between April and October.
With the exception of some southeastern coastal areas in the Persian Gulf, Kish Island has the sunniest hours in the region. In summary, the island tends to be relatively hot and humid most of the year but surely pleasant enough to enjoy a variety of activities. 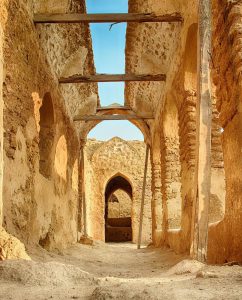 Amongst the Persian Gulf islands, Kish is the more luxurious and developed. Aside from its unique nature such as turquoise waters and shallow beaches, the tourist attractions of this charming island are due to its rich history as well as its kind and hospitable people. The pristine and beautiful nature, the meeting of land and sea, the clear sky, the pleasant air, and the pleasurable reverberation of the waves create such a sense of calm that one cannot even distinguish between imagination and reality.

Kish has some of the most beautiful beaches in the world. The clean and clear blue waters, the lovely coral beaches, the fantastic views of the horizon, and the fascinating underwater creatures are some of the enjoyable features of this island. Among Iranians, Kish is known as the pearl of the Persian Gulf. This small island offers eye-catching sceneries, mouth-watering foods, and adventurous activities. There are numerous beaches on the island with many facilities.

Kish’s population includes significant numbers of both Muslims and Christians. Kish Island is also designated as Free Zone with respect to trade, and in 2009, its total foreign trade was approximately $9.2 billion. As such, fifteen percent of all imports to Iran are through Kish.
Besides the previously existing Iranian Oil Stock Market, it was inevitable that a new exchange, the Kish Stock Exchange was needed to be launched (in 2010) to facilitate foreign investment and monetary activities.

For over 50 years, the blue waters of the Persian Gulf in Kish Island have a guest. Greek Ship or Khoula F was a cargo steamship that has been beached on Kish Island for many years. Over time, she has turned into one of the most picturesque spots of the island.
The Greek Ship was built in 1943 by the British and its original name was Empire Trumpet. Over her long life, this ship has had a number of British, Iranian, and Greek owners. They have changed her name frequently with each ownership. The last owner of this ship was Greek, which explains its current name Koula F, while Naturalist, Persian Cyrus and Hamedan are some of her former names. With an area of 673 square meters and more than 7000 tons of weight, the Greek Ship ran aground in 1966. No one exactly knows what caused its wreck, but some say it was beached intentionally by its captain because it carried a large amount of insurance by a British Company. After its wreck, any effort to refloat the ship was unsuccessful, and the ship started to rust and fall apart ever since.

The ruins of the Ancient Town of Harireh, situated in the center of the island, are said to be over 800 years old. With a 3 square kilometer area, the relics include the remains of a mansion with Ilkhanid era (1256-1353 AD) tiles, a public bath, and a few workshops. According to some sources, Harireh was first built sometime between the late Sasanid period (224-651 AD) and the early Islamic era and was quite renowned during the Saljuk dynasty (985-1243 AD) and the times of the Atabakan of Fars (1148-1282 AD). Archeologists believe that the multi-storied structures of Harireh were destroyed in an earthquake. Referred to in the Gulistan, famous book of poems by Persian poet Sa’adi, the ruins of Harireh bear witness to the flourishing economy of Kish in ancient times when the island facilitated trade between China, North Africa and Europe. Although most of the structures are now in ruins, their form and decorations give one a sense of life in a Middle-East Island during antiquity.