Since the 5th Five Year Economic Development Plan (5YEDP) of 2010 to 2015, the government of Iran has introduced energy savings stimulus models in the form of reduction of electricity payments and feed-in tariffs as incentives in the form of long-term and above market value contracts offered to renewable energy producers for the purchase of electricity.

The government plan included the construction of renewable energy power plants and strategies to engender a decrease in residential and industrial energy usage. After the 5YEDP, and between 2015 and 2018, the Ministry of Energy entered a number of contracts with foreign and local investors.

The government’s energy savings and development of renewable energies programs continued until 2018, at which point the contracts became unprofitable for most due to unforeseeable circumstances. The Ministry of Energy is the main policy maker in terms of electricity generated from renewable energies and execution of energy savings projects. A subsidiary of the Ministry of Energy in charge of planning the production of green electricity is the Iran Renewable Energy and Energy Efficiency Organization (SATBA). SATBA was established in 2017 with the merger of two of its subsidiaries, Iran Renewable Energy Organization (SUNA) and the Energy Efficiency Organization of Iran (SABA).

In fact, SATBA has determined that electricity production from solar energy alone has a potential of 60,000 MW, which is equivalent to over 72 percent of the country’s current electricity consumption. According to the Ministry of Energy, the highest solar irradiation areas are: Fars, Yazd and Kerman provinces– standing at 5.3 kilowatt-hour per square meter (kWh/m2) in total.

According to the 6th 5YEDP (2016-2021), two percent of total electricity production should be from renewable sources. At present, this figure stands at one percent, with solar energy accounting for roughly half of this production. 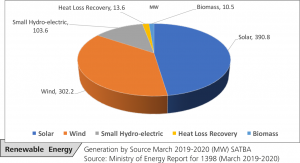 According to the Ministry of Energy, the breakdown of renewable energy generation during the March 2019 to 2020 timeframe is as follows:  As annual electricity generation increases in response to the high demand, renewable energy production must more than double within the coming year in order to meet the aims of the 6th 5YEDP. However, since the reinstatement of the US sanctions in May 2018 and the devaluation of the IRR against USD and EUR, investment in renewable energies in Iran is no longer economical.

In terms of attracting foreign investment to the renewable energy sector, SATBA’s performance during 2013 to 2019 was significant. According to reports issued by the Ministry of Energy, 2.5 billion USD had been invested in Iran’s renewable energy sector from 2013 to 2019. Of that total amount of investment, 70 percent, or 1.75 billion USD, came from foreign companies, while the remaining 30 percent – equal to 750 million USD – was domestically funded. More specifically, foreign investment in solar power plants during the three years period amounted to 875 million USD.

However, foreign and domestic investments are no longer flowing into the programs, especially in the solar power sector. Obstacles precipitating dwindling foreign investment in the solar energy development projects are mostly related to US sanctions which have made transfer of funds a difficult process. Also due to the gradual devaluation of the IRR, the feed-in tariff incentives and SATBA’s power purchase agreement (PPA) payments, both of which are calculated in IRR denomination, no longer serve as viable stimuli for international investors who have lately begun to experience a severe decrease in profits. These exchange- and sanctions-related complications have led to the departure of many foreign companies from Iran, with a few even trying to liquidate their share of investment here.

Given that the Iranian government is keen on reaching the goals set for the 6th 5YEDP in renewable energy generation, drastic changes must be made – and very soon – to contract terms in order to attract foreign investors to the country. Also, in regard to solar power generation, there are many critical areas in which changes need to be applied. This includes changes to the PPAs as well as introduction of more applicable incentives. Aside from the heavy sanctions imposed on Iran, the current coronavirus pandemic has also drastically dampened Iran’s economy. As such, foreign enterprises interested in investing in Iran’s solar power industry will need to anticipate a genuine lucrative business opportunity before venturing into Iran’s renewable energy market.

In early 2020 Carlo Maresca SPA partially withdrew from the project for a 100 MW solar power plant in the city of Garmsar, in Semnan province. The Italian solar development company had invested eight million EUR in the plant and had signed a PPA with SATBA in 2018. However, by April 2020 Carlo Maresca SPA had liquidated its shares in the Garmsar Solar Power Plant down to only 5 percent.

This year, Durion of Switzerland also sold its shares in Jajeram-Mokran 20 MW Solar Power Plant, in Sistan Baluchistan Province, to the local investment company Gostaresh Melal Energy Company. It should be noted that Durion is also developing the 5 MW Kahnouj, Kerman Province Solar Power Plant, and is currently active in the project, as are a few other foreign investors in Iran’s solar power plant operations.

The inability of the Ministry of Energy to arrange an acceptable feed-in tariff procedure in foreign currency has discouraged investment in Iran’s power plant programs. The Ministry has a flexible calculation based on the inflation and devaluation of IRR. However, this cannot cover the financing costs and provide an adequate internal rate of return on foreign investments in the Iranian renewable energy projects. Whereas in 2016 the solar power plant project’s break-even point was reached after four years, in 2020 this break-even point is estimated to be achievable in eight years, or double that time.

All in all, over the years the focus of the Iranian government has moved away from promotion and use of renewable energy resources toward efficiency in equipment and usage of modern technology. The Ministry of Energy provides incentives to power plants that invest in upgrading of generators, turbines, automation systems, as well as increased efficiency in electricity generation together with CO2 reduction.

As the concept of energy savings has moved away from solar and wind power generation due to imposed sanctions and its financial burdens, the Ministry of Energy and the Ministry of Petroleum have both turned instead to waste-to-energy projects, Combined Heat and Power (CHP) and biofuel energy programs. But conceivable future easing of the political climate, the resulting ability of Iran to export crude oil in large quantities and also any stability in the foreign exchange markets could no doubt once again make development of solar and wind power plants economical in Iran, especially with the country’s vast potential for such infinite sources of energy.