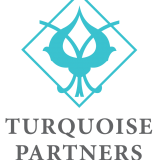 The Iranian stock market continued its positive momentum in the first seven months of 2020, registering a growth of 191 percent in hard currency terms. The IRR exchange rate increased by 76 percent during this period versus USD. Following this, the Iranian stock market had its worst two month decline ever as the overall index fell by more than 38 percent in August and September in hard currency terms. The daily market volume also halved in the last week of September compared to the same period in June.
Amongst the many reasons for the dramatic recent market pullback was the irrational exuberance on the TSE earlier this year. As a result of the weaker currency and a stampede of unsophisticated investors to the market, valuation metrics went through the roof and formed a classic bubble.

Below you can see the graph of the trailing price- earnings (P/E) ratio of the Tehran Stock Exchange, TSE, in 2020:
The Iranian stock market continued its sharp decline in October, extending its unprecedented losses from the July peak to more than 50 percent in EUR terms. This is the most severe fall that the TSE has ever experienced over its 32-year recorded history since the Iranian revolution in 1979. More than 70 percent of this contraction is due to significant share price declines in IRR terms and 30 percent can be attributed to the weakening currency over the course of the past three months. The plunge in the market over this period has been broad-based and across different sectors in the stock market; there have been no safe havens.

The Iranian currency had its worst month versus the Euro in October 2020, according to the official CBI market rate as the IRR fell by 18 percent against the EUR during the month. The gap between the CBI market rate and the free-market rate is now minimal. Therefore, there is no more confusion as to what rate foreign investors should use in order to calculate the real value of their investment.

We believe that the US-election will mark a turning point in the Iranian equity market. With the former Vice President Joe Biden coming into office, expectations are that the JCPOA nuclear agreement will be revived and the Iranian economy will substantially benefit.
Sanctions imposed by President Donald Trump in 2018 have cut off more than two million barrels per day of Iranian oil exports. A potential return of Iranian crude to global markets, should Biden succeed in restoring the JCPOA, would act as a huge relief to both the Iranian economy and also the currency in the foreseeable future. Since the economic situation resembles 2012 in many aspects, the behavior below of the economy, currency and the equity market post-JCPOA could potentially give us a sense as to what could be ahead of us under a Biden presidency.

The Iranian equity market had a strong recovery in November with the main index rising by 20 percent in Euro terms. Our fund also recorded a strong performance as a result of a strategy shift that was executed over the past couple of months to increase the equity exposure of the fund mainly to both value names and also blue-chip companies.
There are three main reasons which can describe the recent turnaround of the market after the steep decline.
First is the optimism in regard to political developments that emerged as a result of the US election, namely President Trump losing the race to his Democratic rival, Joe Biden. The immediate economic outcome of this event has been an uptick in the value of the Iranian currency and curbing the price volatility across both different asset classes and also consumer goods.
You can see how the IRR reacted to the US election developments in November: Given all of the above, we have started to increase our equity exposure so that we can benefit from the potential significant upside of the equity market in 2021. 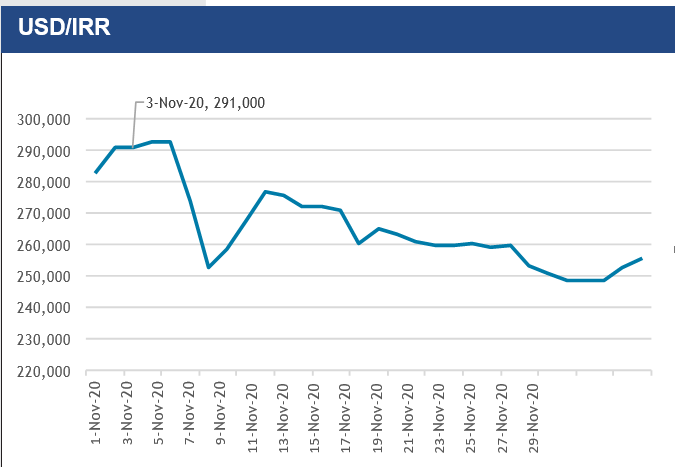 The second tailwind for the Iranian stock market in November was the rapid increase in global commodity prices. Almost two-thirds of the market cap weighting of the TSE is connected to commodities one way or another. Turquoise has created a customized commodity index applicable to the TSE, which balances the weighting of different commodities against the market cap of different sectors listed on the market. As we have seen, global commodity prices have taken off recently, boosting short term profitability prospects for a significant section of the Iranian listed universe.
The third factor was monetary policy. The Central Bank of Iran (CBI) took a more accommodative approach toward the economy by injecting funds to the interbank market in November. The magnitude of the intervention was estimated to be around 2 billion EUR (approximately two percent of the total monetary base of the country) which was a significant amount. As a result, government bond yields across different maturities fell in November as is illustrated below: 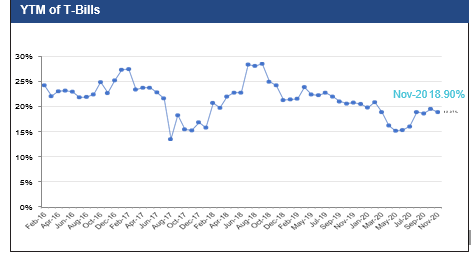 We remain cautiously optimistic about the prospects of the equity market as we anticipate the current positive momentum will persist in the short to medium term.