October was the worst performing month in 2021 in local currency terms for the Tehran Stock Exchange (TSE) since the month of April, with the overall index falling by almost 7%. The TSE tends to underperform when the currency remains flat, with approximately 70% of the index relating to exporters.

Therefore, due to the recent stability in Euro vs IRR, the Tehran Stock Exchange experienced a decline of 6.6% in Euro terms in October. Since the Iranian stock market tends to closely track changes in the currency, the recent appreciation of the official IRR rate has hurt the TSE’s performance in local currency terms. Many companies tend to transact business at the official rate when it comes to conversion of their exports to Rial.

In the domestic credit market, the backdrop seems to be tightening as the yields of short-term government debt securities (T-bills) took another jump to 22.8%, the highest level since May 2019.
Rising interest rates for listed debt securities have accelerated recently as the new governor of the Central Bank of Iran reiterated his commitment to combat inflation and reorganize its financial  relationship with the administration. Current policies are expected to bring up the deeply negative real interest rates, which are currently still hovering around the -16.4% . The latest inflation readings showed that the year-over-year (YoY) change of CPI has fallen below 40%, after 14 months of a higher than 40% level. 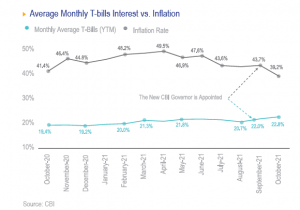 At the sector level, Basic Metals was the best performing sector in October, rising by +1% in Euro terms. 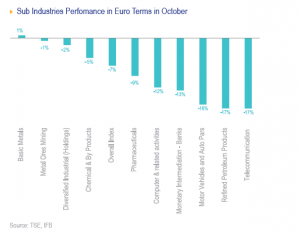 The global price appreciation of industrial metals in the first half of 2021 – led by physical and speculative demand from China – has boosted Iranian investors’ optimism towards such domestic companies. Considering that commodity related sectors amount to more than 50% of the TSE’s total market cap, any fragility in global commodity markets would likely exert some downward pressure on the broader domestic stock market.

Historically, the Central Bank of Iran (CBI) has raised interest rates on bank deposits and fixed income instruments as part of a planned program to counter inflation. In January 2012, the CBI raised interest rates on bank deposits and fixed income instruments for the first time in six years. The government made the decision reluctantly and under significant pressure from various economic  experts and authorities, including the Iranian Parliament. The interest rate rise had been much
needed for some time for two key reasons. Firstly, the state’s expansionary budget had led to a steep rise in the inflation rate and secondly, government borrowing from the CBI had increased sharply.
These same conditions of a government budget deficit and excess borrowing persist now. In August 2021, the CBI said it would revise its policy for interest rate in the interbank market if it learned that inflation expectations were rising through the Interest Rate Balancing System*. In September, the market witnessed a sharp increase in interest rates in the T-bill market. 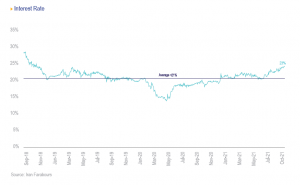 When compared to other emerging and developed economies, the real interest rate in Iran is at a substantially lower level. The chart below illustrates this comparison.

Rising interest rates were not well received by stock market participants as they have hugely benefitted from long lasting negative real interest rates in the past 3 years. The chart below displays the inverse relationship between bond interest rates and equity prices. 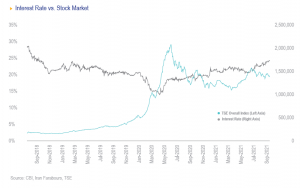 *The Interest Rate Balancing System is a system for guiding short-term market interest rates towards the central bank’s target/policy rate. Under this structure, the CBI sets the floor and ceiling of policy rates and lets other money market rates, such as the interbank rate, move within this setup.