Afsaneh Shojaie has traveled Iran to research native Iranian attire. Soon after, she acquired a studio to make and sell clothes which led to the opening of a few private galleries ranging from London to Dubai. She also has a small, private collection of antique clothes she collected out of passion − not to sell − all kept on display, similar to a small museum, in her house. One of the characteristics of the vast, civilized and ancient country of Iran is its ethnic diversity.

Iran consists of tribes such as Kurds, Lors, Baluchs, Turks, Turkmen, Gilaki, Mazandarani, Qashqai, Bakhtiari, etc., each of which have their own valuable and attractive customs and rituals that have enriched the national culture. Understanding the customs of Iranian ethnic groups is essential. Clothing that was perhaps only used to protect the body from cold and heat permeated over time to reflect all aspects of life such as customs, beliefs, age, gender roles, occupation, social class and historical and geographical conditions. Turkmen is the name of a Turkish speaking ethnic group that has lived in Northern Mongolia for thousands of years. Iranian writers in the fifth lunar century refer to a Turkic ethnic group living in Central Asia. Large groups of Turkmens (türkmenler) are currently living in Tajikistan, Uzbekistan, Kyrgyzstan and Iran. The Turkmens of Iran are mostly located east of the Caspian Sea in the Turkmen Sahara region, the northern part of Golestan province. Small groups of them are scattered in North Khorasan. Important Turkmen cities in Iran include Turkmen Port, Gonbad Kavous, Aq Qala, Gomishan, Maraveh Tappeh, Simin Dasht and Incheh Borun. 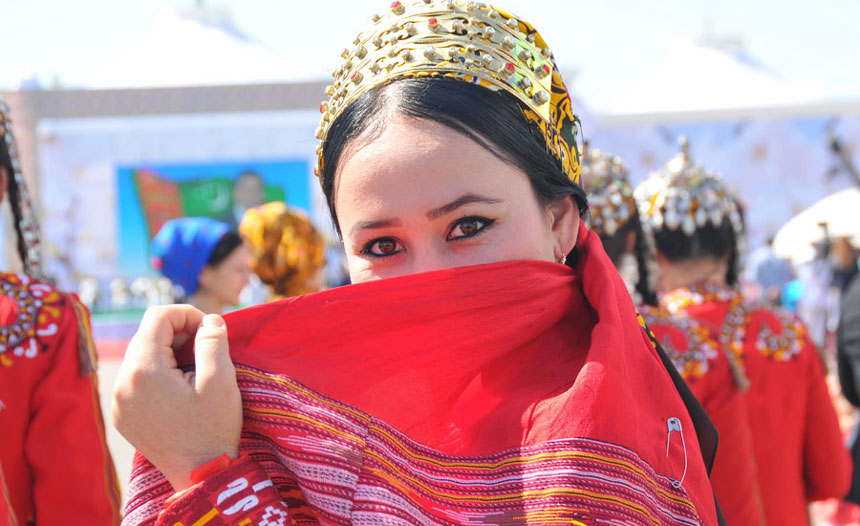 Turkmens have long been engaged in producing silk, felt and carpet weaving; they are also very skilled in horse breeding. Turkmens play their own traditional music, with a unique instrument called Dutar. Turkmen clothing is very unique and filled with beautiful symbols and different coverage levels, which makes them suitable for all ages and occupations. The raw materials of their clothing include animal skin, silk, linen and cotton. They are responsible for growing silkworms and preparing cocoons which provide the yarn and threads that they dye by using natural ingredients such as pomegranate seeds, pomegranate peels and desert plants. AFSANEH SHOJAIE Turkmen women wear Koynek, a shirt which is made of handmade silk fabric, it has several broad yellow stripes and narrow black lines. They also wear a type of coat called a Don which is adorned with special needlework of the region. It is worth mentioning that the needlework on women’s coats is very impressive. They also wear headbands and hats with hand-sewn details. The Turkmen shawl is also an essential part of the traditional Turkmen attire. Turkmen women use their own jewelry in the form of head decorations, necklaces and belts. On the other hand, Turkmen men wear traditional shirts, coats or Dons, pants, hats made of sheepskin and long boots. If the Don is red, it is called Gyrmyz Don, and if it is another color, it is called Garma Don. Turkemen’s impressive culture and aesthetics can be an inspiration for designers worldwide.