With some of the tournaments big guns like Germany and Belgium already eliminated, the likes of The Netherlands, England, France, Argentina and Brazil are still in contention to be World Cup winners.

The Netherlands beat the USA in the first round of 16 match on Saturday, booking their place in the quarter-finals as a result.

Then Argentina had a tough match against Australia later on Saturday evening, but came through thanks to some Lionel Messi brilliance.

France turned on the style against Poland with Kylian Mbappe in a starring role. Les Bleus will take on England in the quarter-finals after the Three Lions convincingly beat Senegal.

Croatia needed penalties to get past Japan and book their place in the last eight and will face Brazil who claimed a big win over South Korea on Monday.

Then on Tuesday Morocco defeated Spain on penalties , before Portugal eased past Switzerland to complete the round of 16 games. 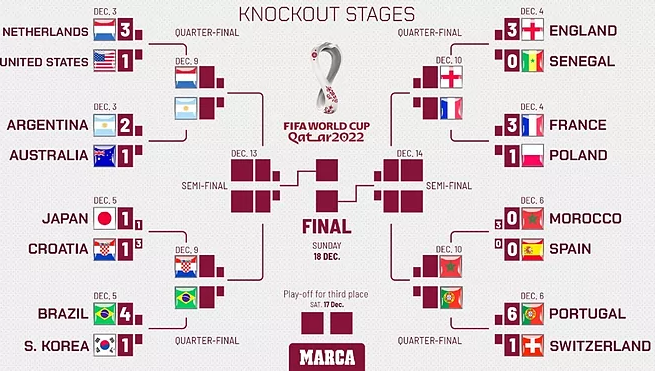 When are the 2022 World Cup quarter finals?

Croatia vs Brazil will kick off the 2022 World Cup quarter-finals on Friday evening from the Education City Stadium. Before the Netherlands taking on Argentina at the Lusail Iconic Stadium.

Then, the early quarter-final on Saturday will see Portugal face Morocco for a place in the semis.

England vs France will be the last of the quarter-finals to be played at the 2022 World Cup at the Al Bayt Stadium on Saturday evening.

When will Brazil face Croatia?

When will Argentina face the Netherlands?

The two countries are no strangers with one another, having met at the World Cup on five previous occasions. The quarter-final will kick off at 20:00 CET/14:00 EST/11:00 PST on Friday December 9.

When will Morocco face Portugal?

When will England face France?

Having not faced each other in tournament football since the group stage of Euro 2004, England will meet France in the quarter-final of the 2022 World Cup. The match will kick off at 20:00 CET/14:00 EST/11:00 PST on Saturday, December 10 at the Al Bayt Stadium.