When it comes to business, the words “Iran” and “sanctions”, unfortunately, are heard or seen side-by-side. Sanctions are an intricate part of dealing with today’s Iran, and this sadly exemplifies the intermixing of business, politics, and even the law. The US’s withdrawal from the Joint Comprehensive Plan of Action, or JCPOA, is an unwelcome move – at the very least from a business point of view – when it comes to the West’s relationship with Iran. But it doesn’t ultimately bring the curtain down on business with Iran. It is an obstacle, but not an impossible one to hurdle – unless of course, you are a US passport holder, in which case the issue is most certainly a legal one above all else.

Ever since President Trump took a much stricter approach towards Tehran, Europe has been trying to come up with solutions, though rather lukewarmly. The European Union has not withdrawn from the JCPOA and has said it has no plans to do so unless the Islamic Republic doesn’t keep up its end of the bargain. Such withdrawal plans might, however, become a worrying reality given the dramatic events towards the end of 2019, sparked by the killing of top Iranian official General Qassem Soleimani by US forces. His assassination comes at a time when the Iranian economy is in dire straits. Whatever its motives, many Iranians felt that they had been undercut enough by the Trump regime, long before the killing. The damage caused to the Iranian economy by the US withdrawal from JCPOA is overtly evident. 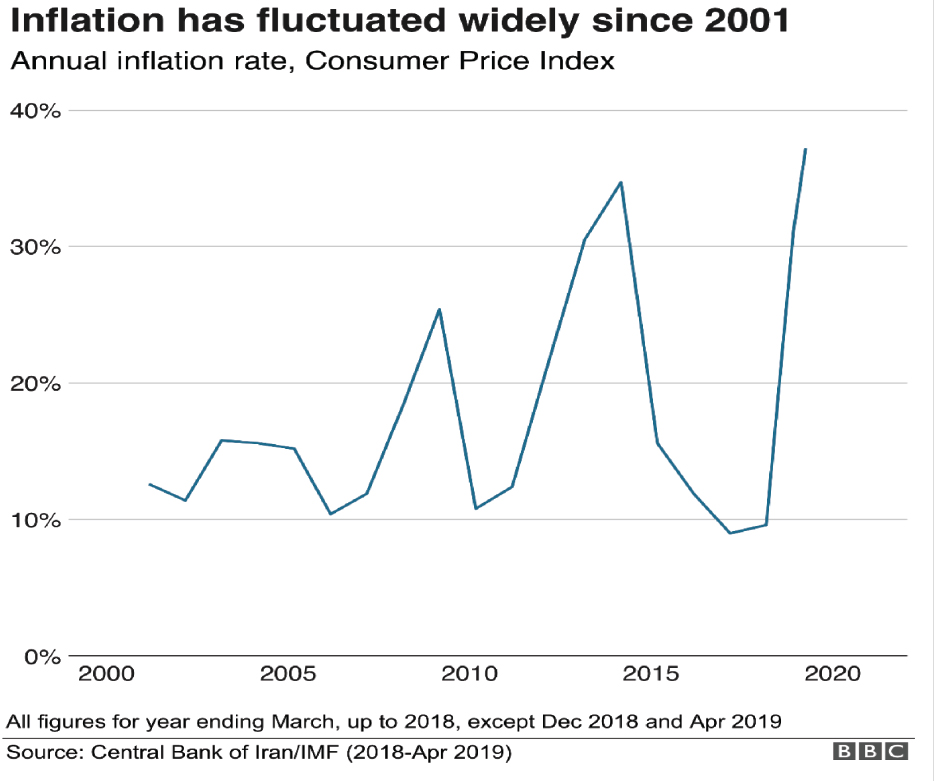 One of the solutions mooted in 2018 by the other side of the Atlantic was INSTEX (Instrument in Support of Trade Exchanges) – the SPV (special purpose vehicle) set up by the UK, France, and Germany, to facilitate deals with Iran that would be palatable even to a hardliner Trump administration. One imagines this would mean, at the very least, that Instex could be a platform to trade humanitarian goods and medicines. Amongst all the turbulence and instability caused to the Iranian economy – crudely manifested by the severe depreciation of the Iranian Rial – the Iranian pharma industry, in particular, has taken a heavy blow. Medicines and treatments are in short supply in a country that prides itself on a high level of education, especially in vocational industries such as medicine.

INSTEX has been in the making for nearly two years, and yet there is little to no tangible progress. The market has heard about it but seen little. The lack of successful trades since its founding comes down to a combination of factors:

Firstly, for humanitarian products, the big names in the field are already transacting with the Iranian government and have little need for or interest in using a platform in the limelight, like INSTEX. Secondly, the Europeans are wary of exhausting American patience which is even more acute in the face of Iranian activity, or the lack of it. The US insists that Iran should reform its opaque financial system which Iran does at a languid pace. Reacting to the US abandonment of JCPOA and the slow- or close to no-motion by the Europeans, Iran is gradually stepping away from the JCPOA itself – in reversible steps, as Iran assures. Rightly or wrongly, Iran feels that with the US withdrawal and being short-changed by the promised economic advantages ever since the signing of the JCPOA agreement, there is not much incentive left for Iran keeping to the nonnuclear commitments. These Iranian withdrawal moves led the E3 countries – Britain, France, and Germany, the very nations who founded INSTEX – to invoke the dispute mechanism in the JCPOA.

Such levels of mutual intransigence will get business nowhere fast and put the EU in an awkward position. The organisers of INSTEX are keen to handle even small transactions to get the ball rolling.

A third factor to consider, though less critical, is Switzerland’s own SPV as a national alternative to INSTEX, exclusively for qualifying Swiss companies. But this platform is not moving in the fast lane either and still negotiating OFAC approval. Business considerations differ here from political and legal ones, as it is not illegal for non-US persons or entities to do business with Iran – it is, however, a case of corporate, rather than legal policy and the attitude a company takes will depend heavily on the US exposure a European exporter has. The annual sales of a large European food company in Iran is equal to one day of sales in the USA. This is the US government’s leverage.

Towards the end of 2019, INSTEX didn’t look doomed, but somewhat lifeless. Its chances of being a success look even slimmer after the killing of General Soleimani. Intransigence turned into raw aggression from both sides.

The Iranian retaliation was a bombardment on an American base in Iraq, carefully avoiding any human casualties.

Europe has been keen not to let the work done so far go to waste, but patience and composure on all sides are running low. Despite invoking the UN dispute mechanism, INSTEX seems to simmer on the back burner.

European diplomats claim that the point of triggering the dispute mechanism was to do exactly that – to resolve an issue through the very JCPOA agreement that all had signed – and not to re-impose sanctions. Hope is not completely lost yet – but it was telling that European officials were barely able to namedrop INSTEX upon release of the E3 joint statement on January 14th, 2020.

With the Rial at an all-time low, and with a contrarian approach, Iran provides a significant yield-driven investment opportunity for non-US parties, though not for widows and orphans (as the bankers’ saying goes). 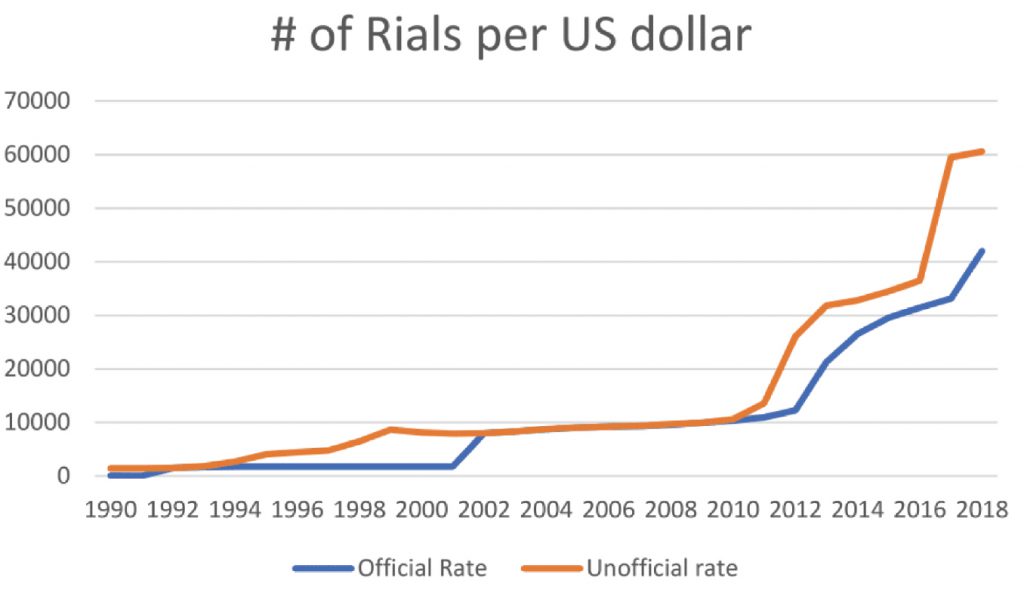 The graph demonstrates the degree of the severe depreciation of the Iranian Rial, and it has only worsened over recent months. Foreign companies who are willing to produce locally and have little or no US exposure are encouraged to consider this opportunity. Growth in some sectors, such as Iranian ecommerce, can see numbers as high as 50% per half- or even quarter-year.

As it stands, companies are currently doing business with Iran and will continue doing so. New business has declined dramatically since the US withdrawal from the JCPOA in May 2018. Big names will continue to avoid Iran, at least in name. But in particular for small- and medium-sized enterprises, or SME’s, willing to take the risk, the Iran glass is still very much half-full rather than half-empty.

Note: At the time of writing, news was released that, despite its apparent lack of news and activity, the Swiss investment vehicle has been established. The Swiss Humanitarian Trade Agreement (SHTA) set up a successful trial run on January 27th, for medicines needed for cancer and organ donation, and valued at approximately 2.3 million Euros. The Swiss banks involved in the trade have received reassurances from US authorities that the transactions can be processed in accordance with American legislation, in return for the data collected by Swiss authorities on the Iranian partners involved in the deal. As things stand, it looks like SHTA has got a head-start on INSTEX, but it is good news either way.

P.S. When this edition went to print, the INSTEX and the Swiss payment channel did an initial small transaction, however neither have yet reached a breakthrough in the international Iranian payment market and doubts remain that it will have a large following. Hope, though, prevails.

Wow, this piece of writing is good, my sister is analyzing these things, therefore I am going to tell her. Brandie Urson Richma