Sharif Nezam Mafi is the Executive Director of IranGrain Conference and Chairman of the Board of Iran Switzerland Chamber of Commerce. Previously he has been the Managing Director of SGS in Iran, Managing Director of Buhler EurAsia, and CEO of Mahak Organization. He is currently the CEO of K+ Group of Companies.

Thank you so much for giving Trends this exclusive interview despite your busy schedule, we are very grateful. If you were to summarize the IranGrain 2022 event, how would you describe it? Please tell us about the history of the event in the past and how it was conceived.

IranGrain 2022 conference, which was held on May 10 and 11, 2022 at the Espinas Palace Hotel in Tehran, was the largest gathering of grain professionals from across the world who are interested or active in the Iranian market. The conference was attended with over 800 participants from 25 countries. It was held in a new format which I think was a rather innovative approach. Each speaker was allocated just 15 minutes on each topic allowing ample room for a wide variety of topics and enough space for effective B2B meetings.

iranGrain has its start in 2020 as an annual conference and is registered in Tehran, Iran. Back then, a group of wellknown agricultural industry experts, at the request of many within the industry, started iranGrain with the main purpose of organizing a new global grain and oilseed conference based in Tehran. Our aim this year was to bring to iranGrain 2022 conference a wider range of topics, some from within the industry but also to look at those outside the industry that over the next few years will be major influencers of Agri-Business. For iranGrain2022, our main focus was the war in Ukraine and how this catastrophic event could have devastating effects on the global grain supply, and in particular its impact on Iran’s need for over 20 million tons of grain imports. We also took a look at grain forecasts both internationally and domestically and asked invited local policy makers to explain the possible changes in the grain market regulations in the coming year. 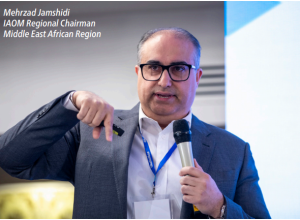 Whose initiative was this and what is the role of the Iran-Switzerland Chamber of Commerce in it? iranGrain was organized by Iran Switzerland Chamber of Commerce (ISCC) given this Chamber in particular is one of the most agile and flexible Chambers in Iran with the fewest number of bureaucratic levels of management that can hamper an efficient convening of such a major international event. ISCC was dedicated to delivering the most prestigious grain conference in the Agri industry calendar in Iran while ensuring that the neutral status of the Switzerland secures the presence, at the conference, of major international grain players, particularly the trading companies.

What was the general theme and agenda for this year’s event? Who were the participating countries and key organizations and who were the keynote speakers? What topics were covered and what were the highlights?

iranGrain 2022 was the biggest annual meeting in Iran for the grain trade, making it the best place for participants to get real-time market intelligence and do business faceto-face. The event attracted exhibitors and delegates from millers, feed companies, traders and producers, as well as specialists from the finance, shipping, legal and technology sectors.

•40 speakers over two days from 10 countries

Who participated in the conference and from which sectors and at what level/position? What did they hope to gain from attending this conference?

The usual cast of companies and personalities of Who’s Who in Iranian Grain sector were in attendance while policy makers from governmental organizations gave an overview of changes in subsidies structure of the commodities sector In particular, we made sure to target participants interested in Iran’s main international grain trading partners such as those in technology and additives. At the same time, we also looked deep into the “total value-chain” of the grain industry making sure we had participation from logistics, storage, legal, and inspection industries that play a vital role in the market. The executive team of iranGrain conference had a different way of holding this conference. We were all aware that our attendees had their own individual preferred methods of retaining new information. iranGrain paid particular attention to learning styles when building out an event strategy. Providing better learning experiences only increased our attendees’ chances of boosting their engagement. To this end we made sure that each speaker was incorporating visual elements in his or her presentation, that they provided an ample amount of time for Q&A, and they distributed handouts after their talk.

The JCPOA is yet to be revived. Is the event attracting global companies in spite of the current no-deal situation? Are you optimistic about the nuclear deal despite the complications?

JCPOA, for all practical reasons, is not relevant anymore. The world has changed after Russia invaded Ukraine and I do not foresee the sanctions being lifted permanently anytime soon. Plus, international companies are much more sensitive to this new world reality with its 2 to 3 spheres of influence divided between US, Russia and China, where spatial region or concept division will exist within which these 3 powerful countries will have a level of trade, economic, military or political exclusivity. Consequently, we need to adjust to living and functioning as usual and at various fronts without banking on any foreseeable lifting of sanctions. Having said that, Iran’s annual need for approximately 20 million tons of grains remains a reality that cannot be ignored. As grain trade is ultimately a humanitarian exchange, iranGrain will remain one of the few conferences at which international actors in the grain sector and its secondary services will be able to work with relative ease, and in an ever-expanding consumer market highly dependent on international trade.

What other issues such as financing, banking transactions, logistics and supply chain management was discussed on the sidelines of the event?

The conference was designed in a way that it covered the full value chain of grains, starting from collection points of grains which include silos and storage technology, and moving down the chain to shipping, trading, banking, and financial service, and all the way to loading technologies, transportation, then milling or oil processing, and finally food production and packaging. In between we dealt with other services that are instrumental in the supply chain of grains, such as legal services, arbitration, inspection and additive services and products that were also covered in this conference. During several occasions, participants had numerous chances to set up B2B meetings and also mingle for networking. The final gala dinner afforded participants to part on a high note and, hopefully, with meaningful and productive talks planned for future business collaborations. 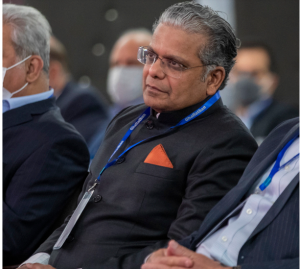 What was the format of the event? Were there specialized panels and/or workshops?

The conference was formatted mainly around discussions led by technical panels made up of grain professionals from all domains of the industry that I mentioned previously, with individual talks in between the panel discussions covering the supply chain services and products. It was held in a new format which I think was a rather innovative approach. Each speaker was allocated just 15 minutes on each topic allowing ample room for a wide variety of topics and enough space for effective B2B meetings. The technical panels were set up in such a way to ensure participants would get familiarized with Iranian government policies regarding the trade and business of grains and the country’s domestic market conditions. Our international panels and speakers also covered topics ranging from current global forecasts to changes in the trends that could impact the future technologies in this field. In particular, we discussed the global rise in energy costs and its effects on production. Climate change was also covered with the introduction of the latest technological innovations from mainly European companies.

What do you see as the biggest hurdles on the way of doing business with Iran, even in a sector such as agricultural commodities which, on humanitarian grounds, should be exempt from sanctions?

Theoretically humanitarian trade in grains and pharma is not sanctioned, but the extent of the theory stops there. In reality, we have restrictions on both of these sectors imposed by the sanctioning counties and exercised by sanction-compliant states. By not allowing a single legitimate financial venue to conduct humanitarian trade, the sanctioning countries have effectively made trades both more expensive and harder to execute. Yet, with a country of 85 million people and a GDP size that of Iran, it is hard to achieve the objectives of sanctions as initially designed. As witnessed in iranGrain 2022 conference, international companies were well represented and eager to do business with their Iranian counterparts. It is my belief that sanctions in the current form will stay for the long term, but the world is now changing and we will be divided in the “sanctioned block” and the “not sanctioned block”. It would not be a far-fetched reality to imagine the sanctioned countries build their own financial clearing systems around sanctions in the near future and interconnect their banking systems to one another. 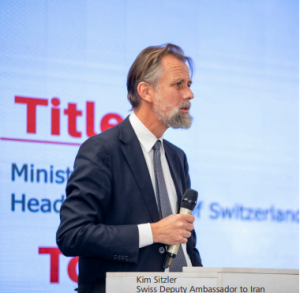 Did the Russia-Ukraine conflict have a negative impact on the event? Were there representatives from either country at the conference?

There were companies from both countries represented in iranGrain 2022 but mostly they were from Russia as the main grain partner of Iran is Russia. The conflict was discussed from grain trading point of view and not from its political aspects. In 2022 the Russian delegation was more robust than in 2020 and we witnessed an active discussion on the Caspian Sea trade. Unfortunately, the Black Sea trade remains dormant due to the current regional conflict.

Talking about Russia and Ukraine, two powerhouses in the grain sector, how has the market been affected with the current war? How is Iran coping with the crisis? What countries are filling the gap? Do you expect the conflict to have a long-term impact on the price and availability of grains in Iran and worldwide?

Both countries combined produce 25% of the global grain supply and disruptions in Ukraine will indeed have a global price impact. However, I do not foresee a supply shortage on global level, but one can surmise more complicated trade transactions from logistical and banking sector perspectives. Russia is starting to understand how to work under international sanctions and it will take a few months for it to adjust to the new world realities. But once that is done, I do not see a risk in grain trade with Iran so long as there is an increase in shipping capacities on the Caspian Sea and enough loading/unloading and storage capacities at the Caspian ports.

What are the next steps now that you have iranGrain Conference 2022 behind you?

As you are aware this conference was a brainchild of the IranSwitzerland Chamber of Commerce given the large presence of Swiss based companies in Iranian grain industry and the organizational team behind the Chamber. So as follow up to the conference, iranGrain 2022 will travel to Geneva and hold a two-day summit dubbed “iranGrain-Geneva Summit 2022″ sometime in September of this year. The summit in Geneva will build on the Tehran conference and give another firsthand and face to face opportunity to companies and individuals that are active this humanitarian field to better find synergies and build on potential market potentials.